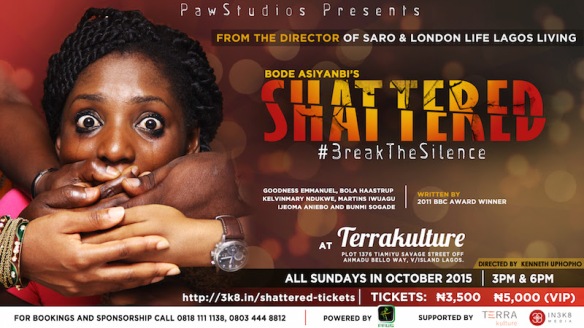 Loveth, arrives at the home of her benefactor Uncle Dave to collect her school fees which was due. Little did she know that this day would be different than the others. Uncle Dave would extend his love for her a little too far …. This ‘Uncle” was friends with her late father and also married to her mother’s only friend….

Should she sacrifice her dreams of going to school or tell the truth and most probably ruin the relationship between the families?

Catchup with behind-the-scenes footage of Shattered on youtube
▪ See more at: http://media.in3k8.com/blog/product/bode-asiyanbis-shattered-stageplay-at-terrakulture/#sthash.mIwIxozg.dpuf